Fasnacht – The carnival march of Basel 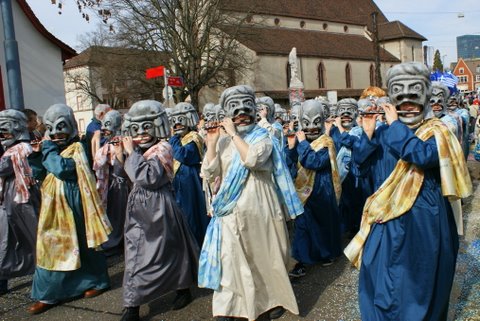 Date: It starts on the first Monday after Ash Wednesday (during Easter period), lasts for 72 hours

In Basel people say that a person either loves Fasnacht or leaves town and goes skying while it’s on. For the former Fasnacht tends to be a lifelong passion and they are called Aagfrässene (enthusiasts). Love for Fasnacht is an obsession. And because around twenty thousand people or even more in Basel suffer this obsession, for those three days the city is truly turned upside down.

The Fasnacht festival takes place annually in the Swiss city of Basel and is put in place by more than 300 cliques. These are groups of people that are meeting regularly and in their free time all through the year to look for social, political or other topics to which they wish to bring attention of the public. Each group selects one topic and gives it a satirical form for the three days that the Fasnacht festival lasts. The groups cooperate with artists to create masks, costumes, large movable constructions and pamphlets. Thousands of masks then parade these topics for days and nights through the city centre accompanied by military marching music played on drums and piccolos. For a short while the festival disrupts the usual social order and opens liminal space for open criticism, satire and creativity. Fasnacht is a ritual of rebellion where the citizens of Basel can openly express their disagreement with the current state of affairs, incarnate conflicts and point at what is wrong with society. Masked participants walk through the city back and forth, over and over. Within 72 hours (days and nights) they walk through the city many kilometers. They passes through the streets, alleys, boulevards, squares, parks, all the places of the historical city centre where their everyday life takes place. Now, dressed in masks that embody the criticised topics, they show it to everyone and to the city itself.

Fasnacht is a three-day long meditation for all of Basel, a torrent of top notch social and political satire on a level that is unparalleled in contemporary European culture. Fasnacht is a fountain of creativity, satire and freedom of expression, but it also has a very solemn character.

Copyright © 2023 Martin Pehal and Barry Stephenson. Reproduction of any material from Ritual in Motion without written permission is strictly prohibited. Terms of Use. Privacy Policy. Powered by WordPress